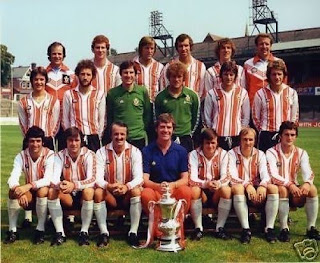 On 13th December 1975 my own team, Brentford, then plying their trade in English league football's fourth tier, won a comfortable 2-0 victory at the appropriately named Plough Lane, home of non-league Wimbledon, in the second round of the FA Cup. I attended the match with my mate Tim, in whose company I would spend so much of the glorious year that was shortly to come.
We would go on to lose a replay by the same margin at Bolton Wanderers, then in Division Two (which today is called the Championship), in the next round. As it so happens the home fixture, which was goalless, earns a mention in my novel The Best Year Of Our Lives.
That was the end of Brentford's brief FA Cup campaign for that season. But for Second Division Southampton, who began theirs with a draw and then victory in a replay against Aston Villa, a dream which few of the team's fans could surely have dared to dream, was just beginning.
TOP LEAGUE MANAGERS
Fast forward (as by that time we could, albeit clumsily, on our clunky cassette recorders) to 1st May 1976. The heatwave had not yet officially started, but it was a hot day at Wembley when 5/1 outsiders Southampton, who had finished sixth in their division, ran out onto the hallowed turf alongside their mighty opponents. Nobody gave them much of a chance, but they had got there on merit and they were determined to make the best of their day out in the capital.
Lawrie McMenemy was managing Southampton, and his task was to pitch his wits against the old hand that was Tommy Docherty, a.k.a. "The Doc". Both were top league managers, but only one team boasted top league players (although a good few of the Saints' eleven had seen plenty of action at the highest level, not least Mick Channon and Peter Osgood).
A SHOCK LEAD 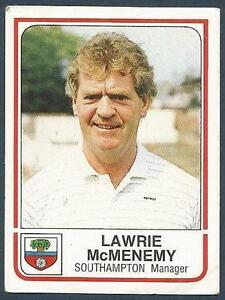 But whoever had drawn up the script had left it at home. Although United started stronger and missed several good goalscoring opportunities, Southampton soaked up the pressure and managed to apply some of their own, with Channon being denied by the reliable England stopper Alex Stepney. They played it long, and out to the wing, until a sucker punch in the 83rd minute by the sadly late Bobby Stokes thrust the Saints into a shock 1-0 lead.
From then until the end of the match the almost 100,000 people who were crammed into the stadium were to share in the excitement of what McMenemy was to describe as "the longest seven minutes of my life". Southampton had defied the odds, and had won the FA Cup Final against Docherty's United giants.
NOT AN ORDINARY YEAR
The celebrations throughout Southampton were amongst the largest ever seen in the south coast city. A quarter of a million people came out onto the streets to cheer the open-top bus, which was also diverted into the grounds of local factories to prevent workers from taking time off to head into town and join in.
1976 was not an ordinary year. It was special on so many counts, but for few more so than for the good people of the city of Southampton.
at September 27, 2019