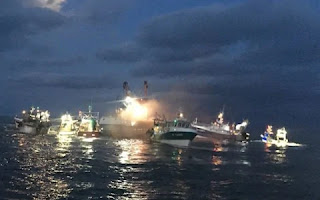 Anybody who remembers the 1970s will recall the sense of stark fear that pervaded during the Cold War, when the West and the Soviet Union fought proxy battles around the world and faced off behind their respective formidable nuclear arsenals. Everyone knew that if the balloon went up there would be no winner, and that there was no defence against an incoming missile beyond taking your living room door off its hinges as per the ludicrous government advice booklet published around that time - in the unlikely event that you could do so within the four minutes allowed to you - and saying a quick prayer.
So it came as some relief that the country we decided to have a real war with was little Iceland. Not that it was a war involving tanks or missiles, but rather a war involving fish, and in particular cod. Wikipedia describes it as having been a "militarised interstate dispute". Which isn't quite the same thing as a war, but it did still involve a lot of flag-waving and a certain amount of diplomatic parry and thrust. And gunboats.
Cod was a big issue in the 1970s, and this ex-maritime superpower which once coloured half the world in red was not going to have its fish stocks threatened by some chilly little island with a population not much bigger than that of Hounslow.
THE THIRD COD WAR
By 1976 there had already been two modern cod wars between Britain and Iceland. Humiliatingly, we had been whopped in both of them. A previous conflagration had actually resulted in a death - that of an Icelandic engineer, who had sadly suffered a fatal accident whilst repairing a boat that had collided with a British vessel.
The 1976 Cod War in fact began in November 1975, following Iceland's unilateral decision to expand its UN-agreed 100-mile fishing limit to 200 miles. The United Kingdom did not recognise the new exclusion zone and continued to fish within in, which resulted in British trawlers having their nets cut by the Icelandic Coast Guard. This in time escalated to a point where frigates and gunboats became involved. A live round was eventually fired which struck the British tug Star Aquarius.
In response, a large British fleet was dispatched to the region by the Royal Navy without the prior knowledge of the Prime Minister or the government. Several confrontations and skirmishes ensued, and Iceland looked to quickly enhance its capability by purchasing gunboats from the United States. When this request was denied, it turned instead to the Soviet Union for help.
NATO INTERVENES
But the defining moment in the war was when Iceland threatened to close the NATO base at Keflavik and itself to withdraw from the organisation. This would have had serious consequences for the alliance, as it would have resulted in the closure of the "GIUK gap" which was of vital strategic importance to NATO's anti-submarine capabilities.
Under pressure from NATO, the UK capitulated once more and agreed to recognise a 200-mile exclusion limit off the coast of Iceland. In return Iceland agreed to permit up to 24 British trawlers to continue to fish within the zone, subject to an agreed maximum catch.
at October 01, 2019