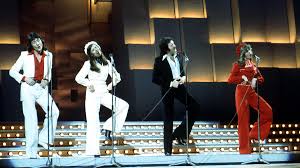 Few institutions have aroused fascination and mockery in such equal measure as the Eurovision Song Contest. Staged by the European Broadcasting Union (EBU) since 1956, it is easily the longest-running televised competitive annual musical event. Each year most of the nations of Europe, plus one or two others besides, vie for the prize of the best newly-composed song.
Although it is performed before a huge international televised audience, quite often the acts selected to take part are relatively new to the scene and use the contest as a springboard to launching a successful chart career. The most obvious example of this was ABBA, who took the competition by storm in 1974 when representing Sweden and went on to become one of the biggest-selling musical acts of all time. Others have somehow managed to fade into obscurity by the end of the evening.
Sometimes though more established artists are chosen to represent their countries (or other countries). 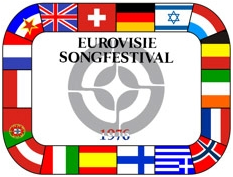 The UK slot has been filled more than once by Cliff Richard, as well as by such notables as Olivia Newton-John, Lulu and Engelbert Humperdinck, whilst Canadian diva Celine Dion has performed for Switzerland and sultry Spanish duo Baccara have sung for Luxembourg.
A YEAR TO REMEMBER
In spite of its dominance of the European pop scene, prior to 1976 the United Kingdom did not have a huge record of success in the competition, having been the outright winner only once - in 1967 with Sandie Shaw's Puppet on a String - although Lulu had shared the honours in a four-way tie two years later. But 1976 was a year to remember in terms of British sporting and performing excellence, and we entered the contest with high expectations.
Brotherhood of Man were a mixed, four-piece, middle-of-the-road outfit who had already enjoyed worldwide chart success with their 1973 hit United We Stand. But a relatively barren period ensued and they decided to enter A Song For Europe, the competition through with the UK selected its entrant for Eurovision, and in February 1976 the group was announced the winner with its catchy composition Save Your Kisses for Me.
A CUTE FINAL TWIST 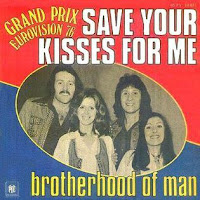 On the big night in The Hague, Netherlands, Brotherhood of Man were the first act. The costumes worn were an interesting but successful combo - the two male singers wearing black and white suits and the two girls red and white jumpsuits along with matching berets. They all four stood in a row, Osmonds-style, singing whilst moving their arms and legs in a quaintly choreographed style. The song featured a man with conflicted emotions leaving his loved one in the morning as he went off to work. At the end of the song came a cute final twist in which the person he was singing to was in fact his three-year old child, rather than his partner as the listener had hitherto been given to presume.
Voting at the Eurovision Song Contest is by selected judges from competitor countries, and the event is routinely criticised for what would often appear to be both tactical and political voting. Nevertheless, support for the group was solid and Brotherhood of Man ended up the well-deserved winners, some seventeen points ahead of the French entry which took second place. Save Your Kisses for Me held the Number One spot in the UK singles' charts and achieved similar success around Europe, eventually going platinum.
INTERNATIONAL CONTROVERSY
Eurovision has not always had the best press, and has often been embroiled in international and political controversy. Musically it most certainly isn't to everyone's tastes. But in a year which saw skater John Curry take gold at the Winter Olympics and James Hunt win the Formula One World Championship, Brotherhood of Man did the prestige of the UK another huge service at a time when much social hardship and economic turmoil was being endured.
The group went on to enjoy a successful chart career, with a number of big hits including Angelo and Figaro. The same group, with the same line-up, is still performing and touring today.
at August 28, 2020