I am always grateful for on-topic contributions from visitors to this blog.
Do you have an interesting story to tell relating to 1976? Some memories from school perhaps, from your neighbourhood, or just some thoughts in general about the fashions, the music scene, television programmes or popular culture?
Please send me a message at info@phil-andrews.co.uk and we can discuss featuring it as a stand-alone blog story. I will be happy to include a byline and a discreet link back to your own blog or website, just so long as it isn't spammy.
This is your resource, please feel free to use it as well as to read it.
at February 03, 2020 No comments:

The Challenge of Casting Adolescence for an Adult Readership

It was at first slightly deflating when recently I received, for the first time since The Best Year Of Our Lives was published two and a half years ago, a negative review on Amazon.
Awarding me one star, the reviewer, who claimed that he was personally familiar with me (?), conceded that he did like the relatability of the setting and of some of the characters, but described the novel itself as "6th former literature". You can't please everyone, I guess.
NOT PRECIOUS
It would be absurd for me to become precious over one solitary critic. Looking on the bright side, the twenty 5* and 4* reviews that the book had hitherto gathered were so collectively positive that there was a danger its ratings were giving off an impression of having been solicited. At least now the range of ratings does look a touch more authentic.
But the latest reviewer has highlighted a challenge which I've already flagged up in at least one previous article, that being how to compile a manuscript heavily dependent upon dialogue between characters who are in their adolescence in a way which will retain the interest of readers who are adults, a good many of them in mature years.
AN ADOLESCENCE OF TONE
The answer of course is that a balance has to be struck. In essence I have tried to keep the dialogue as authentic and in character as possible, whilst pursuing an adult narrative.
But then an adult narrative cannot be unsympathetic to the setting of the book, and as such there is inevitably an adolescence of tone, which is certain to irritate some.
I am genuinely grateful to my negative reviewer for giving me an opportunity to highlight this dilemma once again. I always say that if C.S. Lewis can make great literature out of a talking lion then treating the pubescent banter of a band of eleven- to fifteen-year-olds with a little more seriousness than a minority of readers may feel it truly deserves surely resides within the bounds of literary credulity.
But it won't be for everyone, and it is strangely sobering to be reminded of that fact every once in a while.
at February 02, 2020 1 comment: 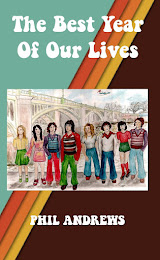