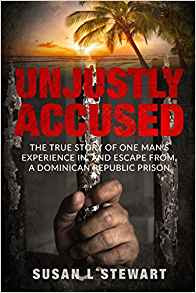 Unconnected though it pretty much is from the theme or genre of my own work, I undertook to review Unjustly Accused for the benefit of a fellow author, and I'm really glad that I did.
This isn't the type of book that I would read ordinarily, but once I had got going I found myself impatient to learn what was going to happen next, and I was somewhat reluctant to put it down. Which, I guess, is the measure of a good story which is well written and presented.
Beyond a brief introductory piece by the author, Unjustly Accused is a story narrated in the first person by Corey, the lead character, who is one of two friends from the United States who visit the Dominican Republic for a break and end up undergoing an adventure of a kind they hadn't bargained for, being banged up for a crime of which they were entirely innocent and facing the daunting prospect of a trial which could result in them spending three years or more languishing in a seedy Central American jail.
SERIOUS SHORTCOMINGS
As if this wasn't bad enough, their anxiety is made worse by the very serious shortcomings of the Dominican legal system. After having eventually been told of the allegations made against them they might have had cause to hope that the apparent inability of the prosecution to agree on where they had been arrested, by whom, and why would lead to a less than robust case against them when the time came for them to appear in court. Sadly their initial optimism took no heed of the possibility that their translator might not be able to speak or understand proper English, or of the fact that their lawyers might actually want them to remain locked up in order that they may extract more money from them.
All the time that this is happening Corey is having to constantly mitigate the words and actions of his un-streetwise friend Jeff who continually threatens to land them in even deeper trouble with his loose talk and general lack of nous. Unsurprisingly his moods swing as a result between depression, resilience and a grim resignation to his unfortunate predicament.
ONGOING DEMANDS
Quite aside from the injustice of their arrest and incarceration, the two friends have to deal with the ongoing demands upon them to pay their way inside, as it would seem that in the Dominican prison system there is paid-for time and another kind of time which one is compelled to do if one is unable to pay, which doesn't sound too appealing to say the least.
I enjoyed this book very much, it retained my interest throughout and always left me eager to take in one more chapter before resting it down. As a UK reader I felt like I could hear the American twang in Corey's voice as it called out from some of the terminology used and the attitude that it displayed. I'll not spoil the story by revealing its ending, but I will say that it had me captivated to the last.
at January 28, 2018 No comments:

The Best Year Of Our Lives: The Characters - Colin Gray

Colin is the younger of two brothers within the gang. In actual fact he has another brother, Jason, who is three years his junior and who makes a brief appearance early into the story, but he is too young to have been a part of the experience and thus doesn't really feature.
But Colin is not just one of the founder members of the gang. He is quite central to the story if one looks at the gang as a fishing net, with its interwoven cords, rather than as a spider's web with all threads leading to and from the epicentre. In The Best Year Of Our Lives Colin is a boyfriend to Beverley and a brother to Jim, with whom he is fiercely competitive for Paul's respect, and indeed for the respect of others.
He is one of the four members of the eight who begin the story as first-years at their respective primary schools, but he is tall and strong and looks older than his eleven years. He lacks Jim's maturity but they are close enough to be competitive.
Loyalty is Colin's watchword - to Paul, to the eight, and in a sometimes less than obvious way to his big brother also. Most of all he is loyal to Beverley, which at their tender ages is no small achievement. Paul at one point in the story finds himself reflecting upon what might make two kids of their tender vintage an item as opposed to just friends, but whatever it is Colin and Beverley have it and retain it (more or less) throughout.
at January 21, 2018 No comments:

The Best Year Of Our Lives: The Characters - Steve Turner

Steve is to some extent a stand-alone character in The Best Year Of Our Lives. He is the comedian of the gang, alternately funny and child-like. He is protective towards his sister Beverley, takes abuse from Jim which is uttered at times in jest and at others in frustration, yet has a serious and intelligent side as is evident from his conversation when he is alone with Paul.
Although the same age as Debbie, he shuns the maturity which she craves so impatiently, finding his element in involuntary noises and ditties about flatulence. When the gang rides out to confront its adversaries he is not in his comfort zone, but he is loyal where others waver and is prepared to play his part.
It wouldn't have seemed right to have partnered Steve off at any point during this story. That would doubtless come later to him, once he had calmed down and drifted by reluctant default into adulthood. For the best year he would be Steve, the entertainer, aficionado of the invisible trombone, faithful to the very last chapter.
at January 09, 2018 No comments: