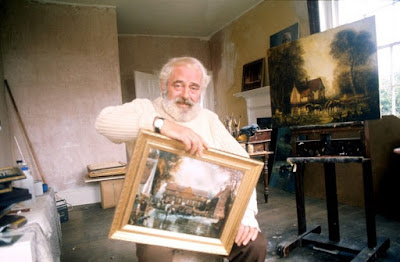 If you are fortunate enough to have a da Vinci or a Rembrandt hanging in your lobby you are unlikely ever to want for much. But what do you think would be the going rate for a Sexton?
Far from being a painter, Sexton Blake of course was a fictional detective. And being a Londoner, talented art restorer Tom Keating knew a little about rhyming slang.
Left-leaning Keating was disgusted by what he saw as a system in which dealers and critics connived to fill their coffers often at the expense of struggling artists, and he undertook to throw the art world into turmoil through the simple expedient of releasing a whole load of fakes, or "Sextons" onto the market. Blessed with an exceptional eye for detail and a steady hand, he faithfully reproduced Renoirs, Gainsboroughs and Degases aplenty.
TIME BOMBS
On every occasion he would cheekily leave what he called a "time bomb" in his works, writing text with lead white onto the canvas before painting on top of it which could be detected by x-ray, or using materials which had only become available in the twentieth century. In this way fellow art restorers would know what they were dealing with, but the pretentious pseuds of the art world usually would not.
In April 1976 Keating revealed to the world that he had flooded the market with over 2,000 fake paintings during a 25-year career as a forger. He was unrepentant, declaring that his deeds had been a protest against the exploitation of artists, living and dead.
Charges were finally brought against him in 1979, but the case was later dropped due to Keating's ill health. He sadly passed away in 1984 at the age of 66.
at July 25, 2020 No comments: 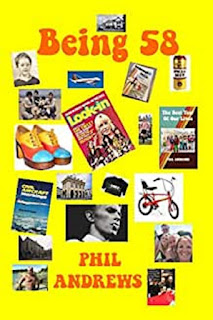 "Hindsight, they say, is a wonderful thing, although it cannot be used to right historical wrongs and is in that sense quite useless".
All the same, we invariably look back upon our formative years with some degree of affection, if inevitably through a rose-tinted lens.
Being 58 is the first of a series of booklets through which I hope to create some context for my already-published novel, set in 1976, entitled The Best Year Of Our Lives. Through it I have attempted to offer a sneak-peak into the mindset of lead character Paul Adams, as he bathes in the moment of the glorious summer of 1976.
Whether we celebrate the innocence of adolescence or denounce the ignorance of the age matters not, for the future has not yet happened. In the land he inhabits he is king.
Looking back to the 1970s through the grey tired lens of the 21st century can be a painful experience, but therapeutic also. It was when wonderful memories were made.
It is not mine to decide whether the seventies finds its place in history as a statue or a museum piece. That is one for the judges of the future. For me, it's only important that isn't forgotten.
Being 58 is available from Amazon in paperback (£2.99) or ebook format (£0.99).
at July 23, 2020 No comments:

Email ThisBlogThis!Share to TwitterShare to FacebookShare to Pinterest
Labels: 1970s, 1976, 2020, Being 58, Paul Adams, The Best Year Of Our Lives

It was a real pleasure recently to be given a one-hour interview slot on the independent radio show Cockney Rebel Connections.
As the name suggests the channel is dedicated to the work of Steve Harley and Cockney Rebel, and I discussed my novel The Best Year Of Our Lives with presenter Stewart Griffin, with particular emphasis on the influence of Harley's music and lyrics on my own formative years and of course on the book itself. The singer-songwriter has appeared on the show in person on more than one occasion.
Some time back I was thrilled to receive some words of praise and encouragement from the man himself, who had read the novel and told me he was "pleased and privileged" to have been an influence.
The music of Cockney Rebel is referenced several times in the story, set in 1976, as the two lead characters are fans.
Click here to listen to the interview, which also includes a selection of songs which I was given the opportunity to select.
at July 05, 2020 No comments: