For a limited time only The Best Year Of Our Lives is available in ebook format completely free of charge.
Simply click here and download the Kindle reader if you don't already have one (that's free too!). Then click where it says "£0.00 to buy" and follow the instructions to get the book.
There no catch, but if you enjoy the read please take a few moments to write me a review on the site.
at April 24, 2020 No comments:

Email ThisBlogThis!Share to TwitterShare to FacebookShare to Pinterest
Labels: Ebook, Free Promotion, Kindle, The Best Year Of Our Lives 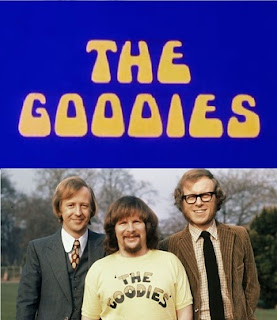 The 1970s was a golden age of innovative and unique, if somewhat dated, situation comedy. But amid all the sometimes predictable sitcoms and the cringe-makingly politically incorrect stand-up there were two comedic institutions which stood so aloof amongst their peers that they defined genres all of their own. One was the team from Monty Python's Flying Circus, the other was The Goodies.
At the height of their popularity in the first half of the decade, the zany trio that was Graeme Garden, Bill Oddie and Tim Brooke-Taylor immersed themselves in way-out, sometimes surreal story lines and purposely absurd low-budget props to create a cult act which we teenagers waited eagerly each week to watch on our clunky television sets, some of us still coming to terms with the demise of monochrome. The trio plied their wacky trade under their given names, but each was an exaggerated stereotype in his own right which didn't always reflect the real personality behind the screen image. So whilst Garden, a real-life doctor, was not wholly out of character as the bespectacled mad scientist that he played, nor environmentalist Oddie as the left-leaning hippy type, Brooke-Taylor's ultra-patriotic, Union Jack waistcoat-wearing royalist was not a particularly accurate representation of his real self. "I had the double-barrelled name so I was always going to play the Tory," he once reflected.
APARTHEIGHT 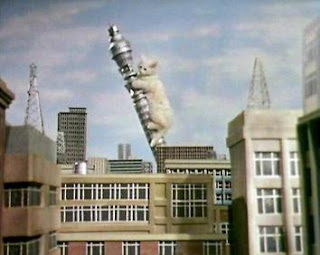 The Goodies were an institution which quite personified the age. No theme was too controversial to make light of (one episode of the show was simply entitled "South Africa" and considered life under a regime in which people were discriminated against for being short under a system known as "Apartheight", much to the chagrin of the diminutive Oddie), nor too off-the-wall. Particularly memorable episodes included the epochal The Goodies and the Beanstalk, and Kitten Kong in which a fluffy white kitten named Twinkle is accidentally infused with a growth potion devised by Garden and subsequently runs amok around London.
No episode of The Goodies though was complete without the interval, during which "adverts" parodying real advertisements of the day featured. Of course, it was all a part of the show.
But their lovably insatiable desire for dominance of the seventies' comedy scene meant The Goodies were never going to be entirely satisfied with a weekly television slot. So it was perhaps inevitable that they would launch their unique act into the music charts, where they would record not one but several hit songs including Father Christmas Do Not Touch Me, Black Pudding Bertha and, most famously of all, The Funky Gibbon. During one of their many appearances on Top Of The Pops they performed a short, blink-and-you'll-miss-it cameo for David Essex as he sang his number one hit Gonna Make You a Star.
LONG AND VARIED CAREER 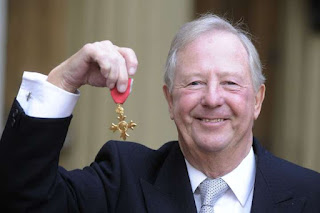 Although unsurprisingly remembered more than anything else for his work with The Goodies, Brooke-Taylor enjoyed a long and varied career in the entertainment business. He worked with such notables as John Cleese, Graham Chapman and Rowan Atkinson, and was a regular participant over forty years in the radio show I'm Sorry I Haven't a Clue. In 2011 he was awarded the OBE.
Tragically he died on 12th April 2020 aged 79 of complications from COVID-19, the nightmare virus which holds the world captive as I write. He is survived by his wife Christine and their two sons Ben and Edward.
at April 19, 2020 No comments: