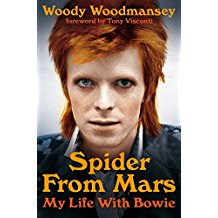 I was always going to enjoy this read. Whilst it is undoubtedly the case that David Bowie enjoyed the services of some of the most talented musicians alive throughout his long and distinguished career, the Spiders period was the closest he ever came (Tin Machine excepted) to being thought of as the leader of a band as opposed to a strictly solo artist supported by a sometimes ephemeral backing cast. Every one of us who was a Bowie nut back in the early 1970s knew each member of the band almost as intimately as we knew the man himself. He went on to achieve some wonderful things, and to be justly celebrated as absolutely the most creative force in the history of the rock medium, yet nevertheless there was something utterly unique about the Spiders From Mars which he would never again manage to create, nor even indeed attempt to do so. Bowie became Ziggy, the subject of his own concept album, and the band being all together was an essential component of that memorable and lingering experience.
It is tragic that Mick "Woody" Woodmansey, still at what today is a relatively young age, is the only survivor of that phenomenon to which those of my generation were privileged to bear witness. Through the 300 pages of his work Spider From Mars: My Life With Bowie the legendary drummer relates to us the story of how the Spiders came to be, from their humble origins in Hull to the very pinnacle of rock superstardom within a few short years, only for the whole thing to come to an abrupt and quite unceremonious end.
A DEEPER UNDERSTANDING
Such a story was always destined to fascinate, but because Woodmansey writes with such clarity, wit and intelligence it was also an easy one not only to follow, but almost to inhabit. When the Spiders were in their pomp I was eleven, still settling in at grammar school and just beginning to adapt to my exciting new existence as a devotee of the cult of glam - my first and forever my most profound musical and cultural experience. I realised very early on that Bowie was special amongst his contemporaries, a serious force amid a consciously and sometimes even exaggeratedly unserious genre, but the combined benefits of maturity and the access to information which the digital age provides allows now for a much deeper understanding of the forces which were at work in the formative stages of this strange fascination. So great was the intensity of this fantastical, if little more than momentary burst of unparalleled creative energy that its influence on what came afterwards cannot be exaggerated.
MASTER OF REINVENTION
Retrospectively we recognise Bowie as the master of reinvention, and it would be plain wrong not to acknowledge that so much of his most memorable material was written and performed in the post-Spiders era. Nonetheless, of all the wonderful incarnations that he unleashed upon a world which never tired of his originality, Ziggy more than any other stood out, not only because he was the first but also because he was the only one who was not created alone. With the Spiders Bowie invented not one character, but four, each of them conspicuously brilliant musicians in their own right, and that is what stands it apart in all our memories. Unlike the various line-ups which followed, the Spiders From Mars were the only ones to flaunt the billing "David Bowie and...".
There were less glamorous aspects to it all, of course. I'm pleased that despite being a Bowie fan I retain enough independence of thought to acknowledge that the Spiders were poorly paid, and sometimes poorly treated. It is to Woodmansey's credit that he is philosophical rather than bitter about this side of things. We remember the good times, and most of us would still envy him his experience.
Woody Woodmansey is still playing the drums, fittingly for his own supergroup Holy Holy which brilliantly recreates the Bowie sound (I know, I've seen them live!) and which also features Bowie's long-time collaborator Tony Visconti on bass as well as an impressive line-up of recognised musicians from the world of rock and pop. To hear the classics of the past played in the present with such faithful accuracy represents the ultimate crossover, of which the great man himself would have been immensely proud.
at November 21, 2017 2 comments: