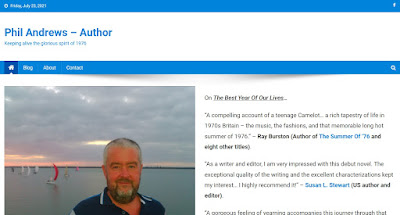 Anyone looking for a change of scenery might wish to take a look at my new Author Page, where all of my current works are featured side by side for ease of reference. It features a handy contact form for enquiries and will run a regular blog featuring longer articles than would be the norm at this site. Please feel free to take a look by clicking here. 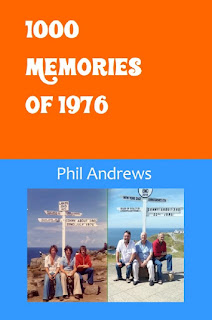 My latest book (upgraded from a booklet, as it had originally been intended to be) is selling well, and has already received several favourable reviews on its product page at Amazon.
1000 Memories of 1976 is just as the name suggests, except that there are actually many more than a thousand. Each and every memory was solicited through Facebook groups whose admins kindly lent me their platforms, and was crafted together into a veritable mosaic of nostalgia which I hope will serve as a valuable reference point for present and future historians of the era.
As 1976 was Bicentennial year across the pond, most of my transatlantic contributors were understandably focussed on that event. For convenience I have included a dedicated chapter through which to capture the experience through a specifically American lens. This includes a number of fascinating pics and illustrations which were sent in along with the written material.
What had started out as an almost half-serious idea turned into a labour of epic proportions, but I'm still glad I did it. 1000 Memories of 1976 is available from Amazon in paperback (£8.99) or ebook (£2.99). As always a sample is available to view before deciding whether to commit.