These Days are Ours - Remembering The Fonz and Happy Days 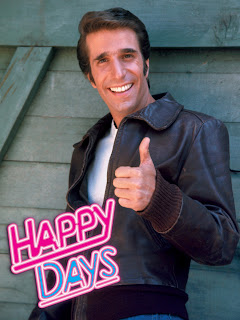 If the mid 1970s could be said to have thrown up a hero who truly reflected the mood of the age, it may well have been one Arthur Herbert Fonzarelli, better known to those of us who were there as "The Fonz".
The Fonz was not a real-life person, but a TV character in a popular American sitcom called Happy Days, played by Henry Winkler who himself was a good decade older than his part. The series was launched on ABC in the United States in January 1974, and came to our screens here in the UK in October 1976.
Arnold's Drive-In
Paradoxically, despite being a seventies' icon The Fonz, or Fonzie as he was sometimes called, did not belong to that era at all. Happy Days was set in 1950s Milwaukee, and centred upon a clean-cut young all-American man by the name of Richie Cunningham whose best (if somewhat unlikely) pal was the suave, leather-clad, high school dropout and biker Fonzarelli. When they and their mutual friends hung out at Arnold's Drive-In, as was oft their wont, there was nary a platformed shoe nor a flared loon pant ever to be seen. When Fonzie punched the jukebox (no need for a coin when you're as cool as he), it would be the sound of Elvis or some other contemporary that would issue forth. Even the addition to the cast in 1978 of glam rocker Suzi Quatro - in character as Leather Tuscadero, the leader of an all-girl band – did nothing to upset the '50s theme.
And the paradox was that this was precisely the thing which lent the sitcom its 1970s appeal. However unique and original the glam period of the early seventies may have been, one of its oddly recurring themes was a kind of faux fifties nostalgia - not so much a faithful re-enactment of that seminal period which heralded the birth of rock culture, but rather a slightly kitschy send-up of it. Think Mud, Showaddywaddy or The Rubettes and you'll get where I'm coming from. Happy Days was the 1950s as seen through the eyes of 1970s youth. We loved it precisely because it wasn't quite real.
Tough guy
As tough guys go, The Fonz wasn't The Terminator or even Dirty Harry. He was hard because he told us he was hard, and the absurdly exaggerated respect shown to him by those all around him served to emphasise the point quite hilariously. Like the coolest kids in any 1970s classroom, the awe in which he was held was enforced through personality more than by menace.
Happy Days, and The Fonz in particular, achieved cult status in its day. Wikipedia notes that it attempted "to honestly depict a wistful look back at adolescence". Whether it was the drive-in or the church youth club or the disco, the dynamics differ little between the generations.
The eleventh and final season of the show wound up in the summer of 1984, but it will long be remembered with fondness for the important contribution it made to the 1970s story.