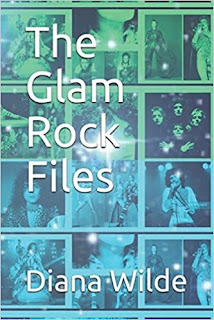 When submitting an old manuscript to a traditional book publisher some years back I was told that I ought to make my work "less autobiographical". She didn't want to hurt my feelings and so she was tactful, but what her advice amounted to was that no-one much wants to read the autobiography of somebody who is not a household name.
The Glam Rock Files flies defiantly in the face of this advice, and with a great deal of success. This is the personal testimony of a schoolgirl growing up in the early/mid-1970s against a backdrop of the unique Glam Rock phenomenon in music and popular culture, an experience which we of the same generation will straight away recognise, and can only share with affinity and affection.
When Marc Bolan first appeared on our screens splayed in his sequins and glitter, we could all sense that something new and exciting was about to happen in our lives. Bolan represented a bridge between a waning late-sixties hippydom and a beckoning new age of superstars - glamorous, flippant and, above all, fun. Like many of us the author was captivated by the emerging glam scene and embraced Bolan as the herald of the new age. And, also like many of us, when David Bowie burst onto the scene a short while later and took up the baton, elevating what was already a mesmerising development onto a completely new level, she recognised him for the cultural messiah that he was, and followed him relentlessly along with his futuristic backing group the Spiders From Mars.
This is not a long book and the formatting is a bit unorthodox, but it works. The hallmark of a good book is no more than that it leaves the reader reluctant to put it down at the end of a chapter, always hankering for just a little bit more. On several occasions I found myself hanging on for a few more pages to try to find out what happened next when I really ought to have been attending to something else as had been the original plan.
GLAM DEMI-GODS
The book charts with anticipation and good humour the progress of the author's love affair with the glam demi-gods, sneaking off to concerts often in stark defiance of her parents' wishes, not only revelling in the music but also waiting for them at their hotels and dressing rooms and, sometimes, managing to steal a moment with her heroes. Lou Reed, Mick Ronson, Freddie Mercury - even Bowie himself, albeit very much in passing - were lured successfully into spending chatting time with their persistent young fan.
As well as being the author's personal testimony The Glam Rock Files provides us with a fairly useful, if slightly selective, chronology of the glam era. I feel she is perhaps just a little hard on some of the less "serious" acts of the day such as Slade and The Sweet, who in my view all more than earned their place in the story of glam. On a purely personal note I was disappointed that there was no mention of Steve Harley and Cockney Rebel, but then as I (or rather my lead character) argued in my self-published novel The Best Year Of Our Lives he and they were an acquired taste, not for everyone.
What made The Glam Rock Files work for me overall was the amount of empathy, and reminiscence, that it engendered. Being male and straight it would be fair to say that I spent less time than the author seems to have done during the 1970s contemplating the bulge in Bowie's trousers, but the sense of awe and excitement which surrounded the glam heroes of that unique and wonderful era was one that she and I shared very much. Those who are of our age group will know precisely what I mean, those who are younger and thereby had the misfortune to have missed it all won't be able to help but get a feel for it from this inspired work.
at October 15, 2017