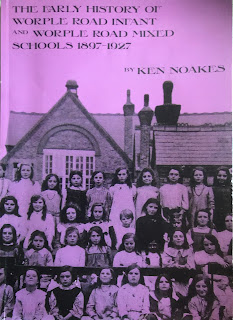 Having reviewed his two previous booklets Crowlink, a Magical Location for School Journeys: an Appreciation and Working at Worple, it would seem a logical next step to complete the trilogy by taking a look at this compelling work by Ken Noakes on the same subject, namely the history of this seminal Isleworth school which was the centre of so many of our universes in simpler days now long gone.
But being a history, and a comparatively long distant one at that, it is actually much more difficult to approach and then to dissect. The reason for this is, quite simply, that other than for the school building itself there is little contained therein with which old pupils like myself can directly identify. Not only does the story end almost forty years before I was ever to set foot in said building, but the names of its characters are all unfamiliar to me too.
Or at least they were. Because in this well-written and deliberately dispassionate account of Worple life between the tail end of the nineteenth century and the inter-war period, my old teacher and friend Ken Noakes succeeded in taking this much more recent ex-pupil back into the classroom in a way which at times made me feel I had actually been there.
QUEEN VICTORIA'S DIAMOND JUBILEE
The scene is set with a reminder that 1897 is Queen Victoria's Diamond Jubilee year and, needless to say, for the children who were to become the first pupils at the brand new Worple Road Infant School in Isleworth this was an occasion like not many other. On March 1st of that year they took up their places at the school, resplendent as it was with all the latest technology in the form of gas lamps and coal fires.
From this point onwards the booklet is a fascinating chronology of the school and its development over the ensuing three decades, heavily fortified by illustrations from the archives and quotations from school and local authority documents. Throughout this process we are regularly updated in respect of the sundry key appointments, including (of course) head teachers as well as other members of staff who were to play a role of what was to become some historic significance.
AN INVALUABLE RESOURCE
As with any good narrative of its kind, it is difficult to single out individual entries as being of special interest without doing an injustice to the others. This 115-page printed A4 booklet, after all, serves as an invaluable resource for the local historian as well as for the casual nostalgic in every single page of its being.
Nevertheless, if only by way of a taster there are a few pieces which serve in particular to remind us of how the culture of our schools, our education system and our society in general has changed since the days in which the work is set. In 1905, for instance, much emphasis was placed upon ensuring that girl pupils were taught the art of being a good housewife, able to knit a pair of gentleman's socks, employ a hemstitch and create a gusset. During the First World War rationing was introduced, first on a voluntary basis but later as a matter of law, and the threat of air raids (usually associated in the public mind with World War Two) had become a reality. Pupils at Worple were given their first air raid drill on 23rd July 1917, and subsequent alarms and sometimes false alarms were to play havoc with school attendance figures.
HISTORICAL PERSPECTIVE
It would be easy, not to mention tempting, to go on and to hone in on other gems of information which might help to place my own time at Worple (1966-1972) into some kind of historical perspective. But, as the saying goes, you'll have to read the book.
The Early History of Worple Road Infant and Worple Road Mixed Schools 1897-1927 by Ken Noakes is available at £7.95 plus £2.00 postage and packing (UK orders). Contact him at kennoakes77@yahoo.co.uk to order a copy.
at September 20, 2019