Alice Cooper at the O2 Arena

As a birthday treat to myself I took me along to the O2 Arena in London to see Alice Cooper, 71 years young, performing the London stage of his Ol' Black Eyes Is Back tour.
Whatever influence Bowie and other artists such as Steve Harley may have had on me during my very most formative years, it was Alice who in fact provided my initiation to modern music back in those long gone hazy days of 1972. It is true that on the very first day of my "conversion" to the pop scene the Number One spot in the UK was occupied by Donny Osmond with his cover of Paul Anka's Puppy Love. But having realised within a week or two that Donny was actually a "girly" artist, my attention soon switched to his successor at the zenith of that illustrious chart, which was Alice Cooper and his classic School's Out.
It helped that my dear late cousin Steve was also a fan, and in fact we both went as far as learning the introductory chords on our electric guitars before becoming distracted by something or other and losing interest.
BILLION DOLLAR BABIES
Billion Dollar Babies became a rare album purchase, rare because an LP ran to several weeks' 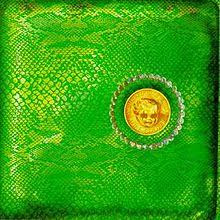 pocket money, and I still recall the pull-out billion dollar note and the perforated tear-off cards which graced the album cover.
But the content was rather good too. Alice Cooper was not just a glam singles artist, but had strength in depth. A fine set of songs from beginning to end.
Alice continued to be one of my go-to artists for much of the seventies. Come the year 1976 he wasn't actually doing a lot as far as I could see, but he was always there, in the background and firmly in my memory and my affections. And of course he has recorded some excellent new material in subsequent years, not least the smash hit Poison.
So when he announced his latest tour, complete with birthday date at the O2, I canvassed my household to see who might be interested in joining me. To my great surprise it wasn't my wife but my 22-year-old daughter Rosie who stepped enthusiastically up to the plate.
A CLASS APART
On the night Cooper was supported by MC50 and The Stranglers, the latter of whom I had seen at Wembley Stadium in 1979 supporting The Who, where to be honest they were less than impressive. But at the O2 they were quite superb, and had it been announced after their set that they had in fact been the main act and it was now time to go home I still would not have left feeling cheated.
That said, Alice Cooper was a class apart. Backed by a formidable band containing literally some of the world's greatest rock musicians, much fortified by a guest appearance by his original bassist Dennis Dunaway, he belted out hit after hit with nary a hint of deference to his mature years. Where some other great vocalists have become, well, not so great vocalists over the passage of cruel, relentless time, Cooper has retained his vocal range and power in all its awesomeness and, were it not for a few wrinkles (well, quite a few actually), we could quite easily have been watching the Alice of the early seventies in full flow.
There is always rather a sense of urgency about going to see long-established, septuagenarian artists when they decide to tour. But Alice Cooper looks fit and on top of his game, and points out without tongue in cheek that as a man who is six years younger than Mick Jagger he still has at least that long to play before hanging up his witches' costume.
As a first-time visitor to one of Cooper's shows I was slightly embarrassed when a 31-year-old fan with whom I got into conversation informed me that it was his third such experience. Thankfully it would seem I've at least six more years to make good.
at October 24, 2019