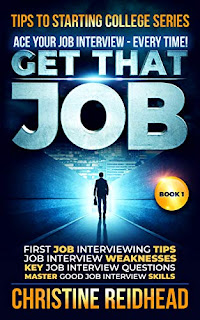 One of the many blessings of being an adolescent is that adult pursuits such as finding a job and paying one's way in the world lie too far into the future to be at all pressing.
But the fact remained in that heady summer of 1976 that I was but a few years from having to make that leap into whole new world of enforced labour - getting up in the morning, donning my jacket and tie and setting off on my four-mile trek to the office (didn't like the smoky buses) for which I would be rewarded the princely sum of £47.17, after deductions, at the end of each week.
Before any job, of course, comes the interview. First time around, I had four of them, and somehow managed to pass all four. But I'm sure it was more by luck than judgment. Had I had the benefit of this excellent book at the time, I’ve no doubt the process would have been a whole lot easier.
POWER-PACK OF INFORMATION
Its modest tally of 75 pages belies the wealth of experience and advice that is contained in this power-pack of information. Somehow within that sparse expanse of wordage everything the interviewee will ever need to know is captured, legibly and concisely, in a broadly chronological guide of what to say and what not to say, what to do and what not to do, what to wear and not to wear when the time comes to throw yourself at the mercy of the person who may be providing your beer tokens for the foreseeable.
Of course there are elements of the process which postdate my own early job-seeking experiences. The use of LinkedIn as a business tool, and the perils of posting the wrong things on Facebook whilst waiting for news of how the interview went, would have been alien concepts to me. But for most of it I was left pleasantly surprised by how little had changed since those long-gone days.
And with my later employer's hat on, I can confirm the wisdom of the advice and information which the author conveys. She clearly has first-hand knowledge of her subject and some mastery of the procedures involved. As well as, quite evidently, an equal mastery of the art of writing enjoyable prose.
I found Get That Job a highly productive and informative read. If you're looking for work, or expect to be in the future, it's a few pounds very well spent.
Get That Job by Christine Reidhead is available from Amazon in paperback, ebook and audiobook formats.
at May 01, 2020