The Thin White Duke - Ambassador of a Desolate Future? 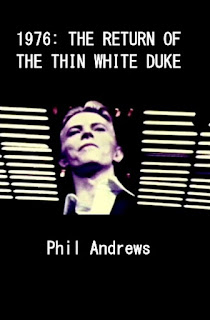 The Thin White Duke was a character created, and lived, by David Bowie in the mid-1970s. Following his lead role in the cult sci-fi movie The Man Who Fell to Earth, Bowie adapted the look of his part Thomas Jerome Newton and transformed him into the sinister Duke - a pale, emotionless, Teutonic aristocrat sporting swept-back orange hair and a monochromatic cabaret-style outfit. In January 1976 his album Station to Station was released, and the interest of the music and other media was aroused by means of an original if not entirely well-advised series of statements on matters of national and international affairs.
In my novel The Best Year Of Our Lives the two main characters, Paul Adams and Jim Gray, are big Bowie fans and they reflect upon this drastic change in his stage persona, from the days of Ziggy Stardust and Aladdin Sane with which they were comfortable and familiar. The thought is not lost on them that the coldness of the Duke may be a baleful harbinger of times ahead.
1976: The Return Of The Thin White Duke is a 32-page booklet in which I have tried to make sense of the Duke, noting Bowie's prolific drug use during the period and considering the role the character played in the artist's transition between a life in Los Angeles that he'd fallen out of love with and what would be perhaps his most creative period, residing in West Berlin and creating his celebrated trilogy with essential input from Iggy Pop, Robert Fripp and Brian Eno.
The booklet is available from Amazon in paperback (£2.99) or ebook format (£0.99).
at August 29, 2020

Email ThisBlogThis!Share to TwitterShare to FacebookShare to Pinterest
Labels: 1976, 1976: The Return Of The Thin White Duke, Berlin Trilogy, Jim Gray, Paul Adams, The Best Year Of Our Lives, The Man Who Fell To Earth, Thin White Duke