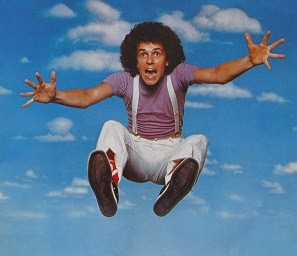 Not that dancing was ever really my thing. If you've heard the expression that a person dances as though they had two left feet - well, I dance like a guy with one left foot and no other. Indeed, only in moments of extreme intoxication have I ever even attempted it.
But that's by the by. Whenever I hear an upbeat, mid-1970s dance classic, of which there were so many, I dance in my head and wish I was back there, performing the moves that I lacked either the self-confidence or the co-ordination (probably both) to step out to at the time.
Leo Sayer's You Make Me Feel Like Dancing absolutely falls into that category. It was an iconic assertion of the carefree spirit which pervaded 1976 from start to finish, taking the then all-important singles charts by storm in the autumn of that year in defiance of the first rumblings of the punk revolution.
Post glam world of disco and dance
But to those of us who were veterans of the early '70s music scene, reborn into the post-glam world of disco and dance before any of us had even heard of John Travolta, this was but the latest incarnation of a likeable and talented artist who had first come to our attention in 1973 when he was featured on Top of the Pops in full pierrot costume performing his debut hit single The Show Must Go On. This original, slightly eccentric number was soon to be joined in my record collection by One Man Band and Moonlighting. I had no idea at the time that Sayer had also co-written another contemporary favourite of mine, Giving It All Away by Roger Daltrey.
You Make Me Feel Like Dancing, though, was something of a new departure. Whilst its predecessors had each told a story of its own - "a circus theme as a metaphor for dealing with the difficulties and wrong choices of life" (thanks Wikipedia!), a struggling street musician constantly avoiding the attentions of policemen and aggressive motorists, and two young lovers eloping to Gretna – this was a disco-facing love song pure and simple.
It wasn't a Leo Sayer song that I'd expected but for me it worked, not least because it tapped into emotions that I was going through at the time.
A rueful romantic ballad
The same must be said for his early 1977 follow-up When I Need You, a rueful romantic ballad which caught me just at a time when the magic that I'd known in '76 had started to fall apart for me, and when the consequences of decisions (or more precisely indecisions) that I'd made that year were just beginning to tear away at me.
Later hits performed in the same vein included How Much Love, Thunder in My Heart, I Can't Stop Loving You, Raining in My Heart and More Than I Can Say (was that last one really as late as 1980?). There was a unique, slightly boy-like melancholy to Sayer's voice which owned every hit, whether home-grown or cover.
Coming home
One of my all-time favourite Leo Sayer songs was actually recorded in the early 1980s - a decade which, in musical terms, was almost entirely lost to me as I pursued other, mostly destructive interests. Indeed I only heard Orchard Road for the first time a few years ago and, oddly, in my mind it took me back to the 1970s - or maybe to 1991, when briefly I touched base with some of my old friends from the youth club once again in an aberrant reunion which duly engendered its own nostalgia pangs over the course of time. The wayward lad had made the call and was surprised to learn that the welcome mat had been waiting for him all along. "I am coming home…", he sang triumphantly.
Back in the day I don't recall any of my peers having been Leo Sayer fans as such - not in the sense that they were Slade fans, Mud fans, T. Rex fans or of course David Bowie fans. And yet neither do I recall any of them ever having had a bad word to say about this compelling, perennial artist, whose singles were included aplenty amongst most of their burgeoning record collections. What was not to like about Leo Sayer?
Sweet memories
It's a blessing that Sayer, now domiciled in Australia, is still performing, and interacting faithfully with his many fans - old and new - on social media.
He has a UK tour coming up this autumn for which I'm canvassing company, hoping to recapture a few sweet memories as well as to maybe discover some of his newer material.
If the bar is cheap enough, I might even dance.

Email ThisBlogThis!Share to TwitterShare to FacebookShare to Pinterest
Labels: 1976, Leo Sayer, Orchard Road, The Show Must Go On, When I Need You, You Make Me Feel Like Dancing