The Girl Who Lived By The River by Mark Daydy - Review 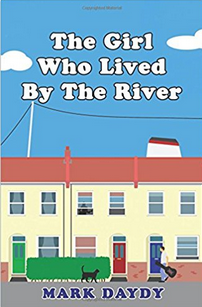 Mark Daydy has written extensively for television and radio over a period of some two decades, working on several award-winning shows. His 2015 Radio 4 sitcom The Best Laid Plans starred Ardal O’Hanlon and his latest sitcom idea has been adopted by NBC-Universal.
My interest in his book The Girl Who Lived By The River was inspired by the recent publication of my own debut novel The Best Year Of Our Lives, also self-published and listed on Amazon. Like my own work, Daydy’s is set in the 1970s and centres upon one adolescent lead character surrounded by a number of others within his immediate and not-so-immediate friendship group. And whilst his characters are slightly older than mine, the essential dynamic is reassuringly similar.
Where the structures of the two novels part company is in the fact that Daydy’s story develops over a four-year period, as opposed to just the one. Indeed it is something of a box set, comprising four shorter stories charting the adventures of the sometimes hapless but basically decent East London teenager Tom Alder between 1975 and 1979, cleverly embracing as it goes along all the contemporary cultural influences which defined those years and neatly deploying them as a backdrop.
Without wishing to give too much away, Tom effectively has three ambitions in life. The first is to find himself a girlfriend and the second is to play guitar in a rock band. The latter comes about more or less by accident as a consequence of his clumsy pursuance of the former, but all the same it sets the scene nicely for the remainder of the story. His third objective, which runs harmlessly (although interestingly) in the background like some benign software application, is to explore his own origins after having been the unwitting recipient of some information which wrenched from him the certainties of his own upbringing and carried the potential to change his world forever.
CONTRAST AND CONFLICT
Where a book of this kind succeeds or fails is in its ability to develop the characters around which the story is based, creating contrast and conflict where necessary just as much as empathy. Whilst Tom is at the centre of it all it is those around him and, specifically, the way in which he interacts with them which captures the imagination and makes one impatient to read on. The author does that very well, to the point where many of us will inevitably see glimpses of some of our own acquaintances in the storyline, especially those of us who are of a certain age and to whom the various contemporary references and the general ambience will be familiar.
I read this novel with my feet firmly in the shoes of the lead character, laughing alternately with him and at him. What begins as unadultered comedy progresses by stages into something more serious as Tom and his friends approach and to varying degrees achieve maturity, but without ever completely losing the sense of humour which defined it in its earlier stages. I was sad when it ended, but it ended well.
Despite my love for writing I am not a particularly prolific reader. If a book doesn’t hold my attention I can quickly lose interest and become distracted. The Girl Who Lived By The River was difficult to put down, as I felt I had come to know the characters and was genuinely interested to learn what was to become of them.
All in all this book is a great read, and a wonderful advert for self-publishing. It is available from Amazon in paperback (£8.99) or ebook format (£2.50).
at September 06, 2017

Email ThisBlogThis!Share to TwitterShare to FacebookShare to Pinterest
Labels: 1970s, Amazon, East London, Mark Daydy, The Best Year Of Our Lives, The Girl Who Lived By The River, Tom Alder